NVIDIA started GeForce GTX 660 Ti sales 16 August 2012 at a recommended price of $299. This is Kepler architecture desktop card based on 28 nm manufacturing process and primarily aimed at gamers. 2 GB of GDDR5 memory clocked at 6.0 GB/s are supplied, and together with 192-bit GDDR5 memory interface this creates a bandwidth of 144.2 GB/s.

Compatibility-wise, this is dual-slot card attached via PCIe 3.0 x16 interface. Its manufacturer default version has a length of 9.5" (24.1 cm). Two 6-pin power connector is required, and power consumption is at 150 Watt.

It provides poor gaming and benchmark performance at 16.65 percent of a leader's which is AMD Radeon RX 6900 XT.

Parameters of memory installed on GeForce GTX 660 Ti: its type, size, bus, clock and resulting bandwidth. Note that GPUs integrated into processors don't have dedicated memory and use a shared part of system RAM.

Types and number of video connectors present on GeForce GTX 660 Ti. As a rule, this section is relevant only for desktop reference video cards, since for notebook ones the availability of certain video outputs depends on the laptop model.

Technological solutions and APIs supported by GeForce GTX 660 Ti. You'll probably need this information if you need some particular technology for your purposes.

This is an old DirectX 11 benchmark using Unigine, a 3D game engine by eponymous Russian company. It displays a fantasy medieval town sprawling over several flying islands. Version 3.0 was released in 2012, and in 2013 it was superseded by Heaven 4.0, which introduced several slight improvements, including a newer version of Unigine.

This is a special benchmark measuring graphics card performance in OctaneRender, which is a realistic GPU rendering engine by OTOY Inc., available either as a standalone program, or as a plugin for 3DS Max, Cinema 4D and many other apps. It renders four different static scenes, then compares render times with a reference GPU which is currently GeForce GTX 980. This benchmark has nothing to do with gaming and is aimed at professional 3D graphics artists.

This video card matches 93% minimum and 79% recommended requirements of all games known to us.

The nearest GeForce GTX 660 Ti's AMD equivalent is Radeon R7 370, which is faster by 3% and higher by 7 positions in our rating.

Here are some closest AMD rivals to GeForce GTX 660 Ti: 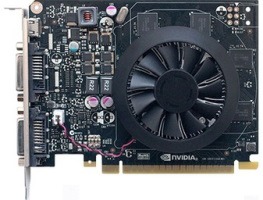 Here you can ask a question about GeForce GTX 660 Ti, agree or disagree with our judgements, or report an error or mismatch.