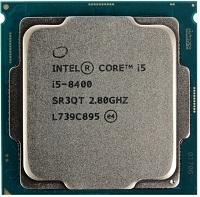 Core i5-8400 and Ryzen 5 1500X basic parameters such as number of cores, number of threads, base frequency and turbo boost clock, lithography, cache size and multiplier lock state. These parameters indirectly say of CPU speed, though for more precise assessment you have to consider their test results.

Information on Core i5-8400 and Ryzen 5 1500X compatibility with other computer components: motherboard (look for socket type), power supply unit (look for power consumption) etc. Useful when planning a future computer configuration or upgrading an existing one. Note that power consumption of some processors can well exceed their nominal TDP, even without overclocking. Some can even double their declared thermals given that the motherboard allows to tune the CPU power parameters.

Technological solutions and additional instructions supported by Core i5-8400 and Ryzen 5 1500X. You'll probably need this information if you require some particular technology.

Core i5-8400 and Ryzen 5 1500X technologies aimed at improving security, for example, by protecting against hacks.

Types, maximum amount and channel quantity of RAM supported by Core i5-8400 and Ryzen 5 1500X. Depending on the motherboards, higher memory frequencies may be supported.

Available interfaces and connections of Core i5-8400 and Ryzen 5 1500X integrated GPUs.

Specifications and connection of peripherals supported by Core i5-8400 and Ryzen 5 1500X.

wPrime 32M is a math multi-thread processor test, which calculates square roots of first 32 million integer numbers. Its result is measured in seconds, so that the less is benchmark result, the faster the processor.

Let's see how good Core i5-8400 and Ryzen 5 1500X are for gaming compared with game system requirements. Remember that sometimes official requirements may reflect real performance inaccurately. Also, your gaming PC must have a decent enough GPU to perform well.

Ryzen 5 1500X satisfies the 100% minimum and 98% recommended requirements of all games known to us.

We believe that the nearest equivalent to Core i5-8400 from AMD is Ryzen 5 3400G, which is faster by 2% and higher by 9 positions in our rating.

Competitors of Ryzen 5 1500X from Intel

We believe that the nearest equivalent to Ryzen 5 1500X from Intel is Core i3-10105F, which is nearly equal in speed and higher by 1 position in our rating.

Here are some closest Intel rivals to Ryzen 5 1500X:

Quick Sync (hardware acceleration of video encoding and decoding for Intel CPUs. Speeds up video encoding by times, but at the cost of somewhat lower quality)

Technical City couldn't decide between Intel Core i5-8400 and AMD Ryzen 5 1500X. The differences in performance seem too small.

Should you still have questions on choice between Core i5-8400 and Ryzen 5 1500X, ask them in Comments section, and we shall answer.

Here you can ask a question about Core i5-8400 or Ryzen 5 1500X, agree or disagree with our judgements, or report an error or mismatch.